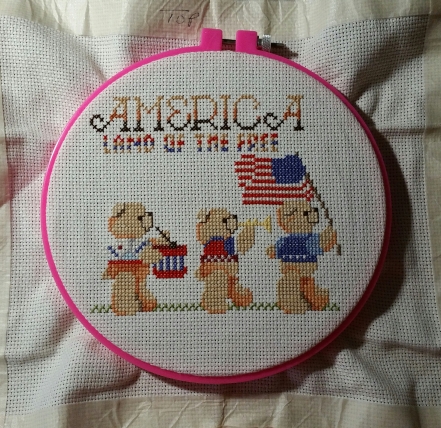 I stitched this small patriotic teddy bear piece last week.  Not sure yet, how I want to finish it, but I want to stitch a few more small patriotic pieces before the 4th of July for some small display on my coffee table.

Here’s the leaflet with this pattern – yep, another one from the 90s: 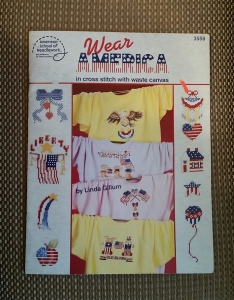 Now, on to politics…

Last Sunday,  JK, shared two links to a blog, asking for my opinion.  Jk and I bounced a lot of ideas back and forth in a comment section on a previous blog post of mine.  He said this blog is written by a friend of his:

Both of these blog posts provide timelines and raise many questions about events from January to May when Mueller was appointed special counsel by Rod Rosenstein.

The time period that interests me the most is the few days from Trump telling advisers he definitely wanted to fire Comey until Mueller was appointed special counsel – May 5, 2017 t0 May 17, 2017.

In the first of these blog posts, this entry left me pondering and I am still pondering, the same things JK’s friend raised in the second blog post:

“May 16
Rosenstein brings Robert Mueller to the White House to meet with Trump as potential FBI Director.  However, by statute the FBI Director is eligible to serve only one term, for a maximum of ten years.  At the end of Mueller’s earlier ten-year tenure as FBI Director it was extended for two years by a special Congressional Act and new legislation would be required if he was to be reappointed.  Trump, Rosenstein, and Mueller converse in the Oval Office.  It is not known whether the legal impediment to Mueller’s appointment is raised.  McCabe has recently published a book in which he writes that Robert Mueller temporarily left his cell phone behind after meeting with President Trump in the Oval Office and that the phone “later had to be retrieved.””

In the second blog post, JKs friend includes this entry, expanding on this meeting:

“The day before Rosenstein announced he was appointing Special Counsel and that it would be Mueller, he brought Mueller to the White House to meet with Trump. Is it true that the President was told Mueller was a potential candidate as FBI Director? If so, was the President told that Congress would have to pass special legislation to allow the appointment? Was there any discussion of Russia or the Comey firing at the meeting? When did Rosenstein decide to appoint Special Counsel and decide it would be Mueller? Did Rosenstein and Mueller have any discussions, directly or indirectly, regarding that decision prior to the meeting with the President? Is it true that, as described in McCabe’s recent book, Mueller left his cell phone in the President’s office and had to return later to retrieve it? If so, did the device record anything while it was left in the office?

Did Rosenstein ever consider recusing himself from the investigation since he was a potential fact witness in any obstruction case involving the President?

Why did Rosenstein not consider Mueller’s long and close relationship with Comey as grounds for not appointing him as Special Counsel?”

I hadn’t heard about this quote when Andrew McCabe’s book came out in February of this year, so I googled and found it in a February Breitbart article:

Back in 2018, McCabe has stated that after Comey’s firing, Rosenstein offered to wear a wire to record President Trump.  McCabe, who became acting FBI director after Comey’s firing, says he discussed Rosenstein’s offer with his general counsel.  Rosenstein has stated he made the comment in jest.  McCabe has been cast as the liar all-around, yet the odd thing is when I watched McCabe testifying in front of Congress, I thought he was way more truthful than Comey or Rosenstein, as far as demeanor, watching his eyes.  Here’s a video of McCabe reasserting that Rosenstein offered to wear a wire, in an interview in February when his book came out, and he believes Rosenstein was completely serious and not joking.

So, Rosenstein agreed with firing Comey, when talking to President Trump and Sessions and McGahn.  Rosenstein even drafted the memo with reasoning for firing, but after Comey’s firing,  Rosenstein went to McCabe and talked like he was distraught over Comey’s firing.  He was a man who was looking for atonement from Comey’s colleagues and friends at the FBI, it seems to me.   At the FBI, they were completely convinced Trump was involved in some nefarious connections to Russia. They believed the Steele dossier.  I believe McCabe’s version of this “wearing a wire”, because the spin level created hysteria about Trump firing Comey, Trump-Russia, and the FBI had bought into the Steele dossier as being reliable intel.

Trump exacerbated the spin hysteria by talking to the Russian ambassador and foreign minister, in the Oval Office, the day after firing Comey, trashing Comey as  a real nut-job.  The day after that Trump did an interview with Lester Holt completely changing his story and this is the problem with anything Trump says – he lies constantly, he obfuscates, and he often says totally incongruent things in the same sentence.

Rosenstein appeared, to me,  to be lying about the wire comment.  I don’t believe anyone at the FBI headquarters was in a joking mood about Comey’s firing.

We know from the Strzok messages that have poured out that Strzok loathed President Trump.  We know Comey treated Hillary Clinton with kid gloves and expected her to be his next boss.  We know Comey believes Trump is a threat to American democracy and Comey believed Trump was conspiring with Russia.  McCabe, despite the Mueller report, still believes Trump and his campaign had disturbing connections to Russia.  Yet, all three seem to have taken the Steele dossier as a serious intel product, only because they trusted Steele.

From the Michael Cohen arrest, we now know Trump lied about not having any business in Russia, and that even while campaigning for president, he was still trying to work out a deal for a Trump-Moscow project.

Andrew McCarthy in his recent podcast with Rich Lowry talks about how the Mueller investigation began and he asserts the mixing of politics with law corrupted the process and that Rosenstein panicked.(around minute 25:00).  I believe it was more than just politics.  I believe the orchestrated Clinton/Dem spin operation amplified constantly by the mainstream media was designed to create a “crisis” atmosphere and drive the spin effort that Trump was an imminent threat (the #Resist SPIN War Campaign) that required the immediate appointment of a special counsel.  (Fox News runs the Trump “Deep State” hysteria spin messaging effort).

Since McCabe and Rosenstein give two different versions on the “wearing a wire” comment, it sure would be a good idea to get Robert Mueller under oath, answering questions about what he and Rosenstein discussed before the Oval Office meeting with Trump on May 16, 2017, about his “left behind” cell phone, if anything was recorded while the phone was in the Oval Office, how long that cell phone was in the Oval Office, and who retrieved it.  If anything was recorded, what was it?

I don’t for a minute believe Robert Mueller would ever have acted in bad faith, but:

“Before I step away, I want to thank the attorneys, the FBI agents, the analysts, and the professional staff who helped us conduct this investigation in a fair and independent manner. These individuals, who spent nearly two years with the Special Counsel’s Office, were of the highest integrity.”

There’s still Peter Strzok being hired, who was anything, but fair and independent and there are lawyers he hired,  with close ties to the Clintons.  They never investigated the Steele dossier, which fed the Trump-Russia hysteria  The Clinton campaign, replete with a vast network of Dem operatives, who specialize in sophisticated smear campaigns,  deliberately fed the Steele dossier and the Shearer dossier, masquerading as intel coming from reliable sources, into official government channels.

And here again we come to a word that doesn’t get talked about much in this whole mess, even though it is central to what happened in 2016.  That word is TRUST.  I believe trust was central to what happened to me in 1998 (see Messages of mhere link at the top of my blog).  That retired general would never have participated in that “operation” against me, unless he completely trusted the information he was given.  He already hated my guts, so I believe that he easily believed the worst of me.   I think Mueller trusted in Comey’s integrity and he trusted in the information he was provided.  Mueller’s appointment came about in a very confined timeframe and in the midst of a massive spin outrage cycle, with the media ranting about a “crisis”  and “Trump is a Russian agent”.

Mueller looked nervous and uncomfortable in his press conference.  I suspect he trusted Comey, who has been reported to be Mueller’s golden boy.  I believe Mueller trusted in the information he was given on Trump-Russia collusion.   Comey made “intent” his key tenet in his charging decision in Hillary’s email investigation and he overlooked the FBI Notes completely.  The months before Hillary became Sec. of State, after Obama’s election, the Clintons had their respective IT guys, Cooper, who set up Bill Clinton’s personal Foundation server in their home and Hillary’s campaign IT guy, Pagliano, use campaign computer equipment to upgrade the family Foundation server, in anticipation of adding the State Dept, message load to their Foundation server.  That upgrade process took months, so Hillary really did find it easier to use one device – she wanted to have their Foundation business and her State Dept. business on one secret server in their home…  Comey does not seem to believe Hillary is a corrupt person.  He does seem to believe Trump is a very corrupt person.

Getting all of the 2016 facts sorted out and on the table is important for our governmental institutions, even if the process will cause a great deal more political upheaval.

2016 should never be repeated.

Hopefully, someone involved in the FBI or DOJ, as this mess unfolded, has the INTEGRITY to sit down with Durham and just tells the truth about what all happened, rather than trying to run competing media spin efforts.

2 responses to “About TRUST”