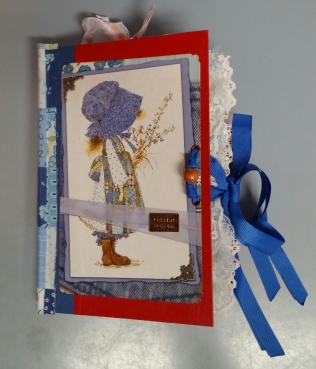 Just when you think the Me Too witches can’t get any lamer, they prove you wrong.  Now, they are demanding an investigation into Trump’s “groping”  and the always arrogant Kristen Gillibrand is demanding that President Trump resign.  This is a pretty lame scorched earth gambit, but it demonstrates that they overplayed the #RussianCollusion effort and that is imploding.  Gillibrand claims there are numerous credible allegations, but they spun one over the weekend that blew up in their face.  They were hysterically tweeting that in 2005-2006 Trump took former FOX News host, Juliet Huddy, to lunch and tried to kiss her in the elevator.

In 2005-2006, Trump was just a rich playboy, this did not happen in the workplace or while he was in office – it sounded like a date.

It bombed and by this morning Huddy was claiming the media exaggerated her account in an interview.  Only problem is she is into this Me Too fainting couch hysterics too and she is the one who gave the media this story.  These women are so phony.   Liberal women who promoted rampant promiscuity for decades are now acting like Puritans and it’s so laughable and ridiculous.  They are really trivializing real cases of sexual assault and harassment in the workplace.  They are hyping “groping” allegations from parties and other social events, where these liberal women have promoted indiscriminate sex for years.  They are deplorable, vile hypocrites.

The allegations against former president, George HW Bush had me fuming too.  He’s 92, in a wheelchair and has diminishing function due to Parkinson’s.  Either the witches of Me Too or the Roger Stone sewer rats tossed out this allegation to score some cheap political points.  I suspect Bush 41 has some dementia too.  To trash a man, who dedicated his life to public service and was a WWII war hero, should cause these vile people shame, but I doubt they care about anything more than their political games.

Trump will jump right into the sewer with them, so on it goes.

I have been crafting more.  I made the above junk journal from another repurposed Ann Coulter book.  I will be glad when all of those are sanitized into something pretty, lol.  This one is for my best friend from high school.  My friend used to collect Precious Moments figurines, but I didn’t have any Precious Moments pictures, so I used my old 2006 Holly Hobbie calendar and a picture from an old Mary Engelbreit calendar.  Here are some more pictures from this junk journal: 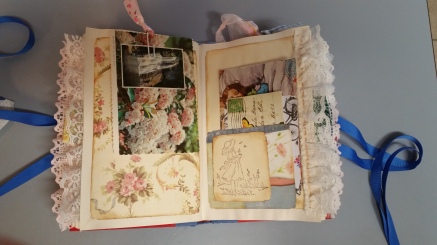 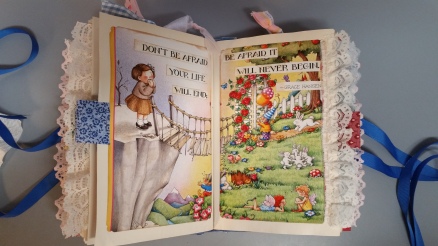 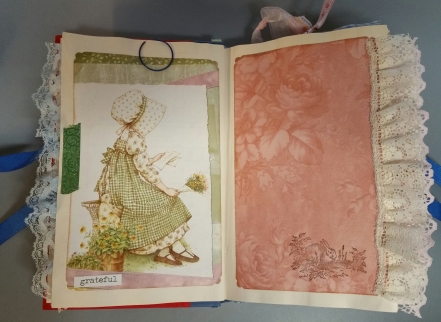 I also started working on some collage junk, that I work on while reading Twitter droppings: 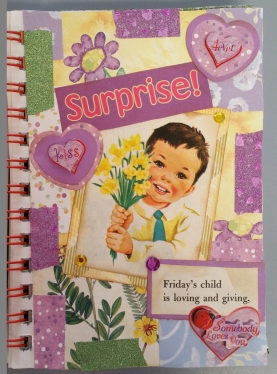 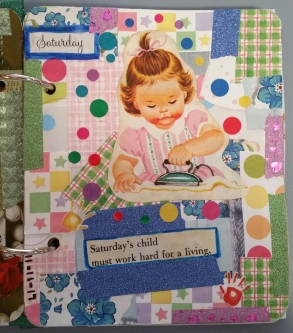 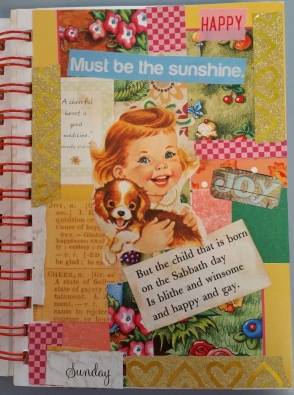 I made these 3 with  just one page of one of my kids beat-up Little Golden Books and scraps of paper.

I also finished this plastic canvas tissue box cover and started another one – have 3 sides done, while reading Twitter: 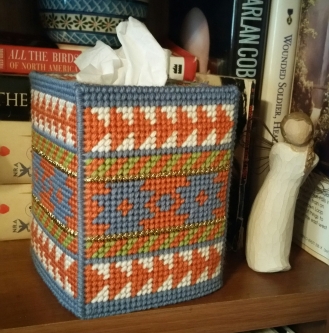 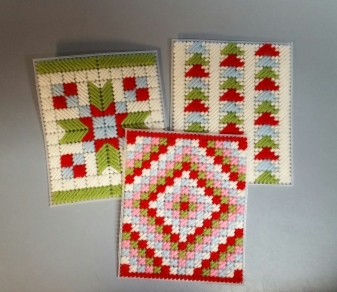 I like using these same easy quilt patterns, because they are quick to stitch and I think they are pretty.

Not sure where America’s scorched earth info war ends, but the #Resist crowd is getting desperate, so I expect more poorly thought out scorched earth attacks.  They really have no idea how ridiculous they sound.  Sadly, many women, even Republican women will jump on board this lunacy, because they buy into so much of the feminist false narratives.   The other things is almost every woman has experienced some incident of sexual harassment or uncomfortable sexual advances from a man.  The very anything goes culture that these liberals created has now reached a point where so many women are angry, so many men and women have no manners, no sexual boundaries and it’s a wasteland.  They don’t like the world they created, so they will try to impose new rules.

A reality about women is that they are catty as hell, by nature, easily join cliques, and engage in a lot of petty fights.  Sure, some women don’t, but many do, especially ones with big egos.  Another fact about women, is they have loyalty issues and can switch sides in fights, often several times in one day.  I have observed this behavior, my entire life and I live  in the real world, not the feminist delusional one.  Women are also prone to petty jealousies, especially if men are involved.  So, this will certainly be quite a spectacle  I have always preferred to work with men, who are more apt to work toward a mission.  I like being committed to a mission, with none of the drama.

America is now entering The War On Men…

Lord, help us all…