Me Too lunacy begins 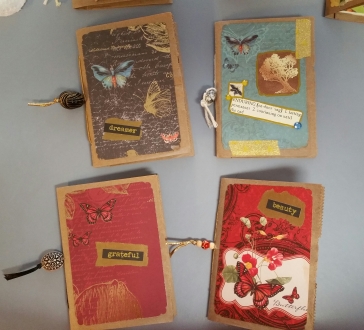 I’ve been neglecting my blog, because I’ve been busy being a Twitter troll and working on craft & needlework projects.  Yes, I guess they call it subtweeting, where you retweet other people’s  tweets, then add your own comments to it.  I don’t have many followers, so I doubt my comments make a huge difference, but I feel better trying to speak up for following The Constitution and the rule of law.

The #Resist is now morphing into the Me Too media lynch mob to try to take down Trump.  The #Resist has been hyping the Trump is delusional spin, and often dragging Republicans into it with hyped media stories.  It’s hard to insulate yourself from believing the political reporting by major news outlets in America, but in the era of #Resist and the Trump Flight 93 spinmeisters, that is where I’m at.

I believed the first woman who made allegations against Roy Moore, but once Gloria Allred showed up, the media non-stop redo of the Access Hollywood started, coupled with the Trump is delusional spin and this new “moral purity” purge on the Left began, well, let’s just say I am not sure how to even begin to decide on what is  a “credible allegation” after finding out that the WaPo descended on AL, along with #Resist dirt-diggers to turn up these allegations.  At first the media hyped there were 30 some witnesses to corroborate that Moore chased teenage girls, but I no longer have real trust in any of this reporting.  I keep wondering if he was a total perv, who chased teenagers, where are more recent victims?  Does he have a long list of affairs or anything like that?  I am open to listening to new allegations, but at this point, I see more evidence this was an orchestrated smear campaign and less that he was a child molester.  I still want to believe the first lady.  The one Allred rolled out and all that crying looked just like the Access Hollywood victim she coached.

I think Moore is vile and unfit for office.  As a judge, he was impeached twice.  Here again, if he does get elected, the Dems blew up that standard as a means to oust him, because the Dems have Alcee Hastings sitting in Congress: https://www.senate.gov/artandhistory/history/common/briefing/Impeachment_Hastings.htm

Senate Dems, like Kristen Gillibrand are setting up this moral purity scenario, insisting that they are setting the standard pressuring Conyers & Franken to resign, but really this is just a move to create political pressure on Republicans to ask Moore to resign if he’s elected and to ask Trump to resign.   The #Resist which was fueled by the Nasty Women contingent has now imposed this new rule, that all women must be believed.  Many Republican and conservative women will be sucked into this feminist cause too.

Since the sexual revolution in the 60s, the modern feminists embraced new rules that tore down sexual boundaries in America.  Now, they have decided they don’t like these rules, so this is their new “cultural revolution” to impose some new ones.  I am not a feminist and reject their rigid groupthink and totalitarian methods.  You must embrace all of their rules, which they change at will.  There’s always been an elite group of feminists who make all the rules. Assuredly they will serve as the Me Too Central Committee that dictates all the new rules. This new Me Too operates off a very unfair and totally unconstitutional premise – that all women must be believed and that all men are pigs, so therefore guilty.  It is absurd to impose some morality that women hold the moral righteousness card and must be believed, while all men must be ostracized from their jobs or bow to the pressures of a media lynch mob.

With duly elected officials, the voters in those states have a right for a constitutional process of impeachment before ousting their elected officials – that’s how our system is set up.  This #Resist Dems setting up this “moral high ground” trope is vile and disgusting, but many Republican and conservative women will buy into it., because almost every woman has dealt with sexual harassment or unwanted sexual behavior from men.  They are encouraging women to go public with every allegation, but this is no way to seriously deal with sexual harassment or abuse in the workplace.  There has to be a fair system in place in workplaces, so that both the accuser and the accused have their rights protected.  Businesses reacting to a media generated public-smearing campaign,  run by a vicious mob, is no way to oust people from their jobs.  In Congress the procedure to remove House members and senators is expulsion. With the President,the procedure to remove him from office is impeachment.

I am all in on everyone following The Constitution.

Men and women are very different and being a woman, I know how catty packs of self-important liberal women operate.  This will be interesting to watch those liberal shrews like Gillibrand trying to force male Dems to submit to her ever-evolving rules, to manipulate the rule of law.  The goal is to oust Trump.  In this process these women set-up, where all women must be believed and these Nasty Women are urging women to speak out, this will be amazing to watch it descend into chaos.

For Trump followers, all along I said Trump is a total fraud and he is, but he was duly elected, so unless there’s some cause to impeach him I remain committed to following the law.  I don’t believe in working to make sure anyone fails at their job, so I hope he buckles down and does the job.  He’s had some wins too.  I wish he would quit tweeting and quit the scorched earth, but truthfully the #Resist would probably destroy him if he did that.  This is like BushDerangementSyndrome on crack.  The scorched earth information war is bad for America and it’s tearing our country apart.

This was Trump’s crowd of friends.  Buried about halfway into this article was:

“It is not known which other NBC executives attended. President Donald Trump, who relished Lauer’s firing last week and declared NBC and Comcast ‘fake news’, was also there.”

I mentioned this line on a Byron York tweet last night and today the Daily Mail appears to have edited out this Trump line, but the attacks on Zucker and Scarborough are still up.  CNN deceptively edited the Trump feeding the koi video recently to make Trump look bad.  ABC botched the Flynn announcement and so it goes.  Then the media sits on their perch preaching about how terrible it is that people doubt the media and that Trump trashes the free media.  Trump decided to play the same scorched earth game that the Left and mainstream media have played for decades.  Trump has some media playing this vile game too.

Despite all that, I hope that Republicans in Congress do their own #Resist and resist the Left’s games to subvert The Constitution under the guise of standing up for women.  And #Resist Trump’s efforts to use a spin effort to gin up effort to subvert the rule of law by shutting down the Mueller investigation.

Everyone needs to work diligently to protect and defend The Constitution.

And now to crafting news.  Above is a photo of these neat little paper bag junk journals I started making, after seeing a YouTube tutorial. Still working on plastic canvas tissue box covers too. 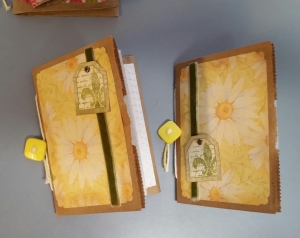 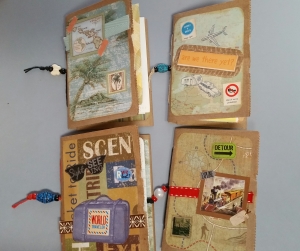 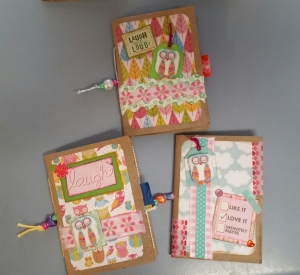 One response to “Me Too lunacy begins”