The American unCivil War of Words 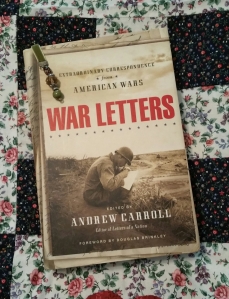 One of my favorite books, which I keep on my table next to my recliner.  The simple velvet ribbon bookmark with beads, is one of my quick projects.

Partisanship can, not only dull our conscience, it can throw our moral compass completely off-course, to the point that we become lost in a swirl of raging waves of overblown rhetoric, mindless lobbing of partisan invective, and end up as furtive enemies waging an escalating American unCivil War of Words.  Certainly, the casualties aren’t the thousands of dead bodies that pile up in real war, but nonetheless this war comes at a great cost and is not just harmless “politics as usual” or  without casualties.  This unAmerican Civil War of Words is killing not only our American character, it’s killing our American republic.

America really began as a place where Europe’s religious malcontents, adventurers, assorted riffraff and yes, the bold and daring, decided to strike out and build their own future.  That’s really who we are.  We are a people, who can not only pull up our roots and plant them in a strange new land, we are a people who will learn to adapt and thrive, despite hardships.  Above is a photo of the top of my craft cabinet. On the right is a container filled with ribbon scraps.  The bottom photos is of pattern leaflets for candlewicking.

Candlewicking is an unique American form of needlework invented by American pioneer women, who moved West in the 1800s.  Money and sewing supplies were scarce, so in the usual American fashion, industrious and creative American women began using candle wicks, which were made of braided cotton,  to create a new form of embroidery, with open designs, using a colonial knot, which is similar to a French knot.  Candle wicks were readily available and cheap, but the open designs allowed covering a larger space with embroidery, with less stitching.

American women weren’t just along for the ride, when they came to America, they were partners in the adventure. They helped build America too, but they also learned to create, innovate, repurpose, conserve, and strive to provide the best they could for their families. 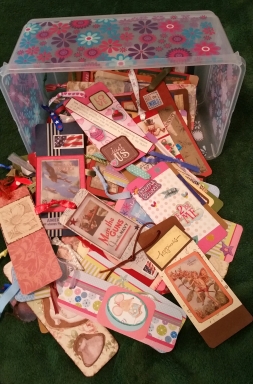 America is a land where we are FREE to dream, as big or as little,  as we choose. The photo above is a small stack of some of my dreams for future quilting projects.  I use little post-it notes to mark pages in magazines and craft books all the time, to bookmark projects for the future.  That Sunbonnet Sue Quilt Special is from 1986 – someday when my patience for applique peaks, I’d like to use ideas from this applique masterpiece and design my own unique Sunbonnet Sue masterpiece.

Being able to keep dreaming is part of our American spirit too.

Sunbonnet Sue is an American original, just like candlewicking. And for those who don’t think needlewomen and quilters can organize, rebel, and express themselves eloquently here’s how Sunbonnet Sue became a beloved quilt motif and how some quilters in the 1980s revolted:

“People fell in love with Sue’s sweet temperament, her ever-present bonnet, and the wholesome and good-natured vignettes of her everyday life. Soon Sue was found on postcards, greeting cards, and even became a design element on plates and dishes.

Her chunky features proved to be enticing for hand quilters and stitchers, and so Sue became preserved for all eternity in a quilt block. In the early 1900s she appeared in  the Ladies Home Journal and Woman’s World magazine as well as countless newspapers and pattern magazines. During the Great Depression, Sue surged to popularity, as folks yearned for brighter and sunnier days.

Sunbonnet Sue’s popularity took a hit in the ’70s and ’80s as some quilters dared to shout, “Not all of us love Sunbonnet Sue!” A group of quilters in Kansas, known as the Seamsters Local #500, worked on a controversial quilt that came to be called, “The Sun Sets on Sunbonnet Sue.” The current events and social unrest of the time are depicted in the blocks of that quilt.

Sue is pictured at Jonestown, Three-Mile Island, eaten by Jaws, tied to train tracks, struck by lightning – her death is represented over and over again in applique quilt blocks. The original quilt is now in a museum at Michigan State University.”

Note: a picture of The Sun Sets on Sunbonnet Sue quilt is at the link above.

The lower photo above is a plastic container of bookmarks, made from leftover scrapbook paper, stickers and yes, I use ribbon from that container of ribbon scraps, as a way to use little scraps of ribbon, rather than throw them away.  I often put several of these bookmarks in cards for friends, in books that I’m giving as gifts or just hand some to my friends and family.  Often, I go in my sewing room and sit at my little craft table and make two or three bookmarks in 10 or 15 minutes, while I am thinking about blog posts to write, but I also experiment with other craft junk and styles of bookmarks, braided ribbon ones, simple ribbon ones, or even the corner bookmarks, which you can see in the photo below:

My friend, Marrietta, is an expert quilter and she does perfectly mitered corners on all her quilt bindings.  She also doesn’t throw away small scraps of fabric.  Many years ago she lived here, but then she and her husband moved to Arizona.  Instead of working on sewing and craft projects together like we used to, we now stay in touch and share photos of our projects and inspirations on facebook.  She makes all sorts of projects with small fabric scraps, but while my quick relaxation project is bookmarks, her thing is making quilted potholders.

Marrietta also taught me how to be a more productive crafter and sewer. She doesn’t make just one thing at a time.  Everything is an assembly line process with her, where you break the project into steps and make four of five at a time.  One time in the mid-90s, she bought these doll heads and hands, plus angel wings on sale somewhere.  She had an idea for angels, so we combined our supplies, since I had a lot of ruffled lace.  We used clear plastic cones, then improvised more cones from some thick acetate-type stuff, which I pillaged from my husband’s stuff in the garage.  Hot glue and a couple hours and we made about a dozen of those angels.  I kept one, which is in the photo below: 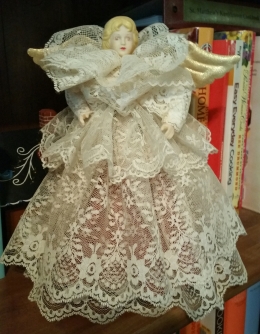 American women took quilting in all sorts of new directions from the staid Old World and American quilting today is still alive and thriving, in fact, American quilters share, teach, and inspire each other in online forums, with videos and blogs.  Below is a picture of just a few of the potholders Marrietta has sent me over the years.  The Hawaiian shirt potholder, in the center, was made with Hawaiian print fabric scraps, that a friend of hers from Hawaii mailed her

I can trace my father’s family tree back to pre-Revolutionary War Pennsylvania, where they arrived in Philadelphia from Germany and settled in the wilds of northeast Pennsylvania.  My father’s generation spoke PA Dutch at home, but very few of my relatives still speak PA Dutch.  While many Americans are proud of their ethnic roots,  from whence their ancestors came, the more important thing to be proud of is being an American.

America is all about believing, that within every individual, lies great potential, no matter the color of your skin, your religion, your ethnic background, whether your’re a man or a woman – in America all things ARE possible.  It is the aspirations of people for millennia to be FREE, played out, writ large in our great nation.

Watching this descent into 2016 Election Hell, isn’t just a national embarrassment, it’s the culmination of decades of social and governmental decay.   The Clintons ushered in a new era of politics in America, a brand of not just ruthless partisanship, but actual information warfare waged on the national media battlefield.  It’s a vile brew of corrupt fundraising, vile character assassinations, vile mass media messaging manipulation, and vile mass media collusion to sell their messaging, all sold with endless manufactured polling data.

George W. Bush barely managed to win in 2000.  Barack Obama took the Clinton information warfare to a more ruthless level and due to his endless racial politics, he has avoided being held accountable for the widespread corruption within his administration.  The minute you criticize him, his Alinskyite foot soldiers attack with charges of racism.  Every area of the executive branch is thoroughly corrupt, even the Defense Department, where narratives substitute for facts or the truth.

Hillary Clinton and her aides, who grossly  and deliberately jeopardized national security and blatantly obstructed justice, were allowed to escape any accountability, because prosecuting them would expose the widespread mishandling of sensitive information by President Obama and his White House staff.  Hillary Clinton represents total disdain for the rule of law in America.

Donald Trump seems intent on playing gutter politics,  like the Clinton machine, but he is also banking on overt Russian intelligence interference in our electoral process, especially with the email leaks. Donald Trump represents the very worst in America celebrity cult worship.

This post began with a photo on one of my favorite books – (“War Letters: Extraordinary Correspondence from American Wars”, Andrew Carroll).  I keep a letter by General John J. “Black Jack” Pershing, the most famous American military leader in World War I, bookmarked.  General Pershing  suffered great personal loss, but he still gave his full devotion to serving America.  His heartfelt  letter to his young son, Warren, speaks to the American spirit we need to rekindle, to get our moral compass pointing toward a stronger, united American future:

“I want you to come so that you yourself can see something of the army and see something of France. I want you to know while you are still a boy something of the fine patriotism that inspires the American soldiers who are fighting over here for the cause of liberty. They are fighting as you know against Germany and her Allies to prevent the rulers of Germany from seizing territory that does not belong to them and from extending their rule over the people of other governments who do not wish to be ruled by Germany. I might add that in order to do this the German army, under orders from the Ruler of Germany, has committed most serious crimes, and for that also we are fighting in order to punish them.

I want you to see some of the battlefields of France with me, over which the American soldiers have fought in carrying out the great purpose of our people. It will enable you to realize later in life just what sacrifice means and just what degree of sacrifice our army is called upon to make and which they have made and are making bravely and courageously.”

He promised his young son a trip to France to see the battlefields and in words meant for his son only, General Pershing sums up the larger purpose, simple, poignant and meant to be private, a father trying to teach his son what we hold dear.   He kept his promise to his son and here’s a photo of young Warren Pershing with his father in France.

General Pershing spoke of selfless sacrifice.  His entire life was a testament to serving America first, which is a far, far cry from self-serving Donald Trump’s America First or Hillary’s endless opining of being America’s #1 victim of the “vast, right-wing conspiracy”.  We need leaders who are personally willing to serve America first