This morning I woke up to icicles on my magnolia tree, which is a rare sight here in coastal Georgia.  The freezing rain has now turned to snow and there’s even a little bit on the ground. 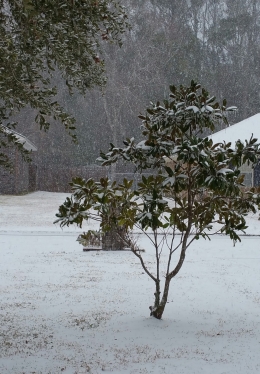 It’s rather funny how Southerners react to a little bit of ice and snow.  The local school and business closure announcements started in the early afternoon yesterday.   Last night the governor of Georgia declared a state of emergency before this storm even hit.  One of my dogs reacts like a typical Southerner too.  She slipped on the icy patio, which scared her and then she stood in the back yard, barking at the falling snow, as if  she’d lost her mind.  She’s definitely a Southern belle personality… bless her heart (Southern code language intended).

In over 20 years of living here, most years we don’t even see so much as a snowflake, so I’ve been enjoying sitting here looking out the window watching the snow.

Of course, old habits die-hard, so I’ve been reading the news too.  One of the most annoying things about the mainstream media is how they report, using Obama hacks, as if these are credible, unbiased sources on policy, especially foreign policy.

The Obama administration’s default foreign policy position was a fearful crouch and endless foot-dragging before making any decisions.  President Obama and his administration bowed and scraped to America’s adversaries for 8 long years and our adversaries read that as American weakness.  The Russians, Iranians, and Chinese began to escalate at harassing American Armed Forces in international territory, at sea and in the air.  President Obama did nothing to dissuade their aggression.

The worst moment, was in January 2016, when Iran captured two American vessels and American sailors, whom they videotaped and photographed for propaganda that was demoralizing to America’s military.   Then Secretary of State, John Kerry, took credit for the release of our sailors, but he THANKED Iran for their “care” of our sailors and tried to play this national embarrassment and humiliation off as some sort of great diplomatic victory.

And therein lies the problem.  The Obama administration, with the mainstream media selling the Obama narrative, sold this event as a Obama foreign policy “success”, instead of reporting the truth.  The truth is the Iranians violated international law, both capturing our sailors and using them for propaganda purposes.  The Obama administration’s failure to defend America’s military, but instead to kowtow to Iran and then THANK the Iranians was bordering very close to traitorous  behavior.  The Obama response was not a diplomatic victory in any sense.

It was a national disgrace!

However, the mainstream media seemed completely unaware that the Obama administration handling was a disgrace and even worse they sold the Obama narrative that this was a Obama foreign policy success.  It was a total lie.

That the mainstream media both bought into every Obama narrative and sold it brings me to the present.  They continue to pedal every bit of spin the Obama hacks (always identified as former foreign policy officials or intelligence experts) spew.  The mainstream media also portrays highly politicized former Obama intelligence officials, James Clapper and John Brennan, as if they are unbiased sources, when they played starring roles in every Obama foreign policy debacle.

Comey with his obsession to burnish his image as that of heroic fighter for truth, with tweets like, “But justice roll down like waters and righteousness like an ever-flowing stream” Amos 5:24, tirelessly works to bolster his carefully cultivated public image as James The Sanctimonious Truth-teller, but is he really?

I’ll answer my own rhetorical question: “NO!”  Comey went along with the Obama narrative to bury Hillary’s email server scandal.  Nothing about his July 2016 email server statement made sense.  He listed CRIMES, then spent the second half of his statement trivializing those crimes, which he stated had been committed.  And as he was speaking, President Obama and Hillary were on Air Force One jetting away to a campaign stop…   Just another of their “time to move on” moments, which the media aided in pushing off the front page headlines..

Yet, the mainstream media always quotes Comey as an unimpeachable source.

You don’t need to watch FOX News to become jaded on the mainstream media reporting.  All you have to do is consume mainstream media news with some objectivity.  President Trump is not the only one who lives on Twitter.  Most of the mainstream media folks live there 24/7.  And even more obnoxious than Trump’s tweets are the Obama hacks breathlessly tweeting about how everything Trump does is “unprecedented” and how Obama’s foreign policy was perfect…

January 3rd and a blog post on politics already…

I need to do better working on my good intentions.

23 responses to “Snow and politics…”