A pox on both your houses

Comey has done more to unify Republicans in the past 24 hours than Trump has done since he became the Republican nominee for president.   Here are my observations from Comey’s testimony and the political fall-out.

Today the media is in full-throated defense of Comey.  Pelosi is tweeting about #ProtectOurDemocracy from Trump & the Russians, I presume, and America’s War of Words continues (here and here).

Up for redefinition, courtesy James Comey’s testimony, are a “matter”, where Comey testified yesterday that Loretta Lynch asked him to refer to the Clinton criminal investigation as a “matter”.  Comey did obey and used that Clinton spin language.  Now,  Team Lynch is rebutting that Comey was told to do that characterization and I saw one tweet explaining the goal was to use consistent language, not a spin effort to use the Clinton campaign language to downplay the criminal investigation:

New: A denial/clarification of Comey statement about Lynch, from a source familiar with discussion, to NBC News: pic.twitter.com/vqsAmWsidF 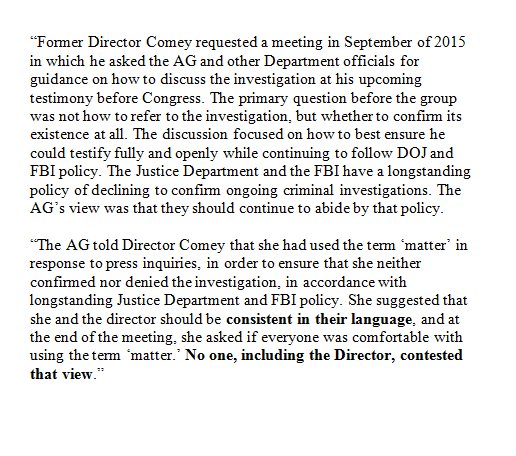 Comey’s double-standard problem stems from his being a willing lackey for the Dems with burying the Clinton criminal investigation and aiding in Loretta Lynch’s Clinton clean-up effort.  Lynch was caught meeting privately with the spouse of a target of a criminal investigation.  She refused to recuse herself from the investigation, but instead, put Comey in a compromising position, by making a public statement that she would abide by the FBI’s recommendation on the Clinton investigation.  It is NOT the FBI’s job to make a recommendation on prosecution, but Comey went along with that.

Comey appeared before Congress to explain his decisions and he sounded more like Hillary’s defense attorney than the director of the FBI.  Loretta Lynch, likewise testified before Congress about the investigation.  Her testimony was akin to giving the Congressional Republicans questioning her the middle finger. It was a disgraceful stone-walling effort.

President Trump is an epic liar, just like the Clintons.  No need to rehash the endless, ongoing partisan War of Words, but America was the big loser yesterday.  There were no “winners”.  Comey damaged himself in some ways, helped himself a bit in others.  Trump came across as corruptly trying to influence a FBI investigation and putting political pressure on the FBI director, but he won big on some other points.

Comey admitted that he personally leaked his memos of his meetings with President Trump to the media, through a third-party, a friend.  This admission made Comey appear to be out for revenge and a partisan leaker.  That Comey’s friend, Preet Bharara, a Trump-fired DOJ official, was sitting in a reserved seat, courtesy of Chuck Schumer, added to the partisan political aura surrounding Comey.  Today, the pundits are debating if Comey’s memos were personal notes or official FBI records and if what Comey did was “leaking” vs. whistleblowing.  Anonymous Trump sources suggested that Trump’s lawyer may demand Comey’s leaking be investigated.  Comey legal eagle friends are countering that such a request would be Trump abusing power… to silence a whistleblower.

Comey is not a whistleblower.  His notes are not like his personal diary and per his own testimony, those notes were  FBI documents at the center of several high-level FBI meetings about the ongoing investigation into Mike Flynn.  If these memos were part of the official FBI decision-making process on an important investigation, that would make them official records, I believe.  Jonathan Turley, Georgetown Law Professor,  argues that Comey’s memos are FBI documents:

“The problem is that Comey’s description of his use of an FBI computer to create memoranda to file suggests that these are arguably government documents.  Comey admitted that he thought he raised the issue with his staff and recognized that they might be needed by the Department or Congress.  They read like a type of field 302 form, which are core investigatory documents.

The admission of leaking the memos is problematic given the overall controversy involving leakers undermining the Administration. Indeed, it creates a curious scene of a former director leaking material against the President after the President repeatedly asked him to crack down on leakers.”

Alas we move from Bill Clinton’s server, for his foundation emails, being cast as Hillary’s server, to the contents of that server being divided into State Department records and Hillary’s personal emails, with Bill Clinton’s foundation emails disappearing literally and from any mention by the media, to now Comey’s memos are being cast as Comey’s Dear Diary entries…  Psst, don’t forget that David Kendall’s office reported to the media that they had saved the entire content on that server on a thumb drive.  Patrick Kennedy, the State Dept Clinton email fixer, testified to Congress that he believed the FBI had that thumb drive (along with Cheryl Mills and Heather Samuelson’s laptops).

From Comey’s public pronouncements exonerating Hillary Clinton, going so far as to insist she had no criminal intent, it’s not surprising that Trump, being as corrupt as the Clintons, assumed Comey would play ball and be willing to play with him too.  Comey admitted to telling Trump three times that he was not under investigation and Trump became angry that Comey would not exonerate him publicly.  Comey decided not to compromise his integrity for Trump as he had for Hillary Clinton.

Paul Ryan characterized Trump as being “naive” about how things work as an excuse for Trump’s highly inappropriate pressure in those private conversations with Comey.  Trump isn’t “naive”, in fact, if there’s one thing Trump is an expert at it’s reading people and leveraging power.  Trump expected Comey to play politics with him, just as Comey had done for Lynch/Clinton.   Trump will overplay his hand, trying to fight Comey, Dems and the media and go too far attacking Comey.  He was back on Twitter this morning, rallying his base by branding Comey “a leaker”.

All of this endless redefinition and spin highlights the complete dysfunction of our political parties.

“Maine Sen. Angus King was pressing Comey about how he interpreted phrases President Donald Trump used in a one-on-one February dinner, in which Trump urged Comey to drop the probe into just-fired national security adviser Mike Flynn.
King, an independent, asked Comey if he interpreted language like “I hope” as directives from the President.
“Yes. It kind of rings in my ears as, ‘Will no one rid me of this meddlesome priest?'” Comey said.”
http://www.cnn.com/2017/06/08/politics/will-no-one-rid-me-of-this-meddlesome-priest/index.html

I prefer to go Shakespearean:

Or in the modern vernacular:

A pox on both your houses!

One response to “A pox on both your houses”