The flowers in my bird bath started blooming again.

My late mother never did plastic canvas needlepoint, but she assumed I could fix this tissue box cover I had made for her in the 90s, which one of her dogs chewed up.  She gave this back to me shortly before she died and asked me if I could fix it.

I pulled it out a few days before Mother’s Day and I restitched a new one, salvaging the concho trim and reusing that.  I salvaged two sides and had to take out some stitching and replace it, but the plastic canvas was intact.  I made those sides into mug mats, by adding fringe on the short ends.  The pattern was from a magazine and it’s supposed to look like a Mexican striped blanket.  Despite this design not being my taste really, I am keeping this tissue box cover and the mug mats for sentimental reasons 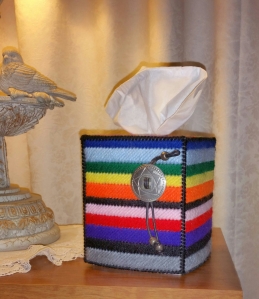 I also stitched two other plastic canvas tissue box covers in the past few weeks.  One I already gave to a friend, but here’s the other one: 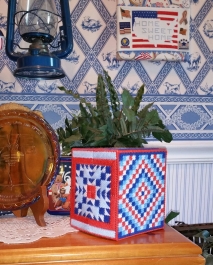 I finished another free DMC pattern I found on the Italian DMC website and the pattern had May in Italian at the top, but I changed that to “Welcome”:

I finished it into an approximately 5 X 7  “cube” using instructions from a couple different online tutorials.

Yes, I am stitching a lot.  It relieves stress.

I watched a bunch of videos yesterday on making paper boxes and covering them with fabric, a craft called “cartonnage”.  There’s some amazingly complicated bags, trays, even little gypsy wagons made out of cardboard using this technique.  It reminded me of all the cardboard boxes I covered with fabric and pretty paper as a teenager to make my own stylish storage, so “cartonnage” is  another craft in my near future.

And I’m still trying to keep up with the bizarre news and the media feeding frenzy on Twitter.  I can’t decide who is more off their rocker, Louise Mensch with her constant stream of Trump conspiracies and her endless maze of crackpot theories or Sean Hannity with his believing the Seth Rich/Wikileaks story without any real evidence other than Julian Assange mentioned Rich’s murder.  Hannity is leaping at this Rich story as complete exoneration of Trump or his campaign colluding with the Russians.  According to Hannity if Rich leaked the DNC emails to Wikileaks, that means the Russians weren’t involved… except that Wikileaks is very likely a Russian front operation, so the source of those emails doesn’t conclusively prove there was no Russian collusion or Russian influence in regards to Wikileaks.

Hard to believe so many journalists reported on Melania Trump brushing aside Trump’s hand as they walked the red carpet during welcome festivities in Israel.  Her hand swat went viral.  That was big “news” all day yesterday…