America needs to become ONE TEAM 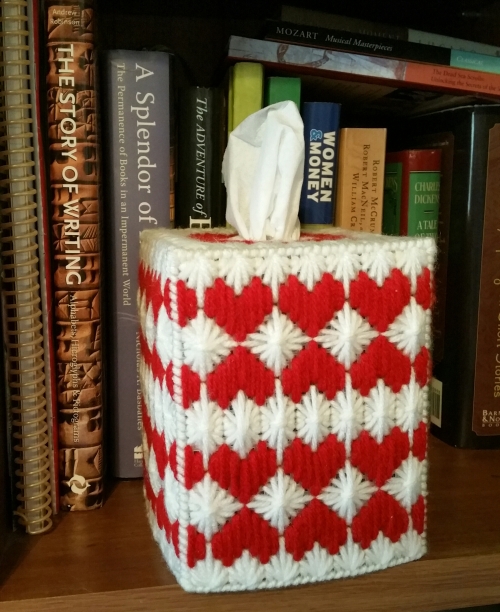 We haven’t even “officially” exited the “Obama nightmare” and entered the “Trump Strong-Man Era”, but I’m stitching away…  Used red and white for this pattern, instead of just one color, as the pattern instructed.  Think it will make a cute Valentine’s Day tissue box cover for my youngest daughter’s desk. Think I will make one for my oldest daughter’s desk at her work too.

Now, on to politics:  What in the hell are Obama and Kerry trying to do?  They have not only sold Israel down the river a second time, but they’ve basically handed over regional domination in the Mid-East and beyond to Russia, Iran and China.  All the thugs on the world stage, thanks to this feckless administration, are in the driver’s seat and America is almost irrelevant.

Back when Hillary was Secretary of State and the Arab Spring bloomed bright in delusional idiots’ heads, the Obama administration tried to sell the Muslim Brotherhood as a “mostly secular” organization.  The Obama administration supported the ouster of President Mubarak and backed Mohamed Morsi, a MB leader.  That move completely put Sinai security in jeopardy and effectively threw Israel into a very serious security crisis.

With all the mainstream media and Dems hype  of “fake news”, well the Obama administration & Democratic Party continue to be the biggest aggregators of “fake news”, with their endless fabricated “talking points” and “narratives”, which the mainstream media repeats constantly… selling it as real news.  Let’s be clear, this hype is really propaganda that is planned, packaged and sold to generate hysteria and public concern – it is designed to manufacture “public opinion” that aligns with their political agenda.  In simple terms it’s sophisticated mass media brainwashing and it only works with massive media collusion, as I must have said dozens of times in the past year.  The orchestrated nature of the talking points (aggressive keyword messaging with relentless repetition) and the vast mainstream (liberal) media collusion that aids in that messaging is combined with a relentless repetition of polling data to manufacture public opinion and nudge it toward the desired political agenda.

Here’s a repeat of what I believe Clinton SPIN and Obama “narratives” really are:

The reason Trump broke out of the pack was because he used the borrowed Clinton-style mass media saturation/scorched earth strategy.

That strategy is a sophisticated INFORMATION WARFARE strategy introduced into American politics by the Clinton political operatives.

It is a form of mass media brainwashing and antithetical to American free speech principles!  To succeed this strategy requires MEDIA COLLUSION.

It can NOT work without that media collusion.

Here are the components:

Only Democrats had successfully used this strategy before Trump, because the liberal media never before gave BILLIONS of dollars in free media for one GOP candidate, to run a “GOP Insurgency” for 8 months straight on all three cable news networks nor did the mass media cable networks ever collude or facilitate in the mass media messaging for any Republican candidate or cause.

Just as the Wikileaks leak has exposed the MEDIA COLLUSION between the DNC and the media to rig the system against Sanders, that SAME media collusion exists between the Potemkin Trump campaign (or the Clinton operatives who were in the shadows masterminding this charade) and the media.

This mass media saturation requires constant messaging coordination between political operatives and the media facilitators to keep the SPIN cycle moving. Trump’s “win, win, win” is exactly like Carville’s “sex, sex, sex” during impeachment. I feel sure Trump’s MEDIA COLLUSION will be exposed before November.

And the scorched earth part of the strategy is really just the mass media saturation strategy on steroids, replete with endless character assassinations (low-energy Jeb, lyin’ Ted, little Marco, etc.) and a take no prisoners attitude.

The selling of polls as a “scientific” metric to gauge public opinion and polling results over 50% as a legitimate reflection of the “will of the people” has dumbed down America and created a nation of sheep, easily herded to conforming to the polling/media viewpoints.   Watching how polls were used to sell Donald Trump as the “GOP Insurgent” by the liberal media and many “conservative” news outlets during the GOP primary, then watching the liberal media switch to the Clinton Scorched Earth 2.0 mode at the end of February/early March with the staged showdown in Chicago and coordinated media talking points blitz of “Trump the Fascist”,  the media wasn’t just reporting the “news”, they were active political players, driving a political agenda.  CNN, MSNBC, ABC, NBC , the Washington Post and many others were actively engaged in shameless agitation propaganda to discredit Trump and promote Hillary.  FOX News, Drudge Report, many talk radio venues, along with Wikileaks (a likely Russian front) and others were busily selling Trump.

Now, I’ve been called all sorts of names in the past year online, but since I am a nobody homemaker, have no monetary incentive to bolster any political candidate, well, I don’t really give a crap what names I get called.  I am still free to speak my mind in America.  So, first I want to point out a polling sound bite the media is selling to hype the “fake news” crisis and then I want to make a few big picture comments.

A Mediaite article citing a poll about dumb Trump voters who believe “fake news” has been getting circulating on Twitter, largely retweeted by liberal media types.  The Mediaite article states:

“No matter how many times law enforcement and the media insist that there is no Democrat-led pedophilia ring being run out of a D.C. family restaurant, there will always be people who believe that there is.

Specifically, there will always be Donald Trump voters who believe that Hillary Clinton traffics kids out of a pizzeria basement. That story was spawned and propagated by fake news sites and even led to a man discharging a gun inside of the restaurant in question. Still, the rumor persists.”

You got it?  Trump voters are just mindless idiots, who need smart liberals to police the news and protect them from “fake news”.  The right uses a lot of these same tactics now too and Trump won, because he mastered the Clinton SPIN cycle during the primary, where he repeated endlessly that he was “winning in all the polls” and the American media (liberal, FOX News, talk radio) all colluded to sell Trump as the “GOP Insurgent”.  Sure, there’s discontent across America and populist sentiments swirling, but Trump is a media-created President, the same way President Obama was cast as the second-coming, walking on water, making the seas part, transformational leader.

First off, my default reaction to hearing about “our democracy” makes me want to shout, “America is a republic!”   Then my less reactive response to the Russian influence operations hysteria is, “what the hell did you expect from Russia and other adversaries, when our President is so gutless that he allows US Armed Forces to be humiliated repeatedly by being harassed in international territory and last January, Iran captured two American naval vessels and crew, then had them on their knees, broadcasting those images around the globe?  It was the most shameful, gutless act of moral cowardice and failure of American leadership since probably Somalia in the 90s.  The Obama administration and John Kerry did NOTHING and praised Iran for resolving the situation peacefully…  They got on their knees too!

Only when the Russians escalated their information warfare operation during the 2016 election did clueless politicians notice the Russians are on the move – because it affected Washington politicians.  The Washington politicians weren’t concerned enough to demand actions when Iran took our sailors hostage or Russia was buzzing our planes and harassing our ships.  No, only when it became a partisan political issue could President Obama and the Dems get on their soapbox with their liberal media friends colluding to manufacture this Russian influence crisis.

Russians and other American adversaries have continued influence operations for DECADES in American universities and colleges, in black urban areas, and throughout the American educational system.  President Obama marinaded in professors who were promoting anti-American agendas and willing purveyors of hostile foreign influence operation messaging.  The Marxist/Alinsky crowd are some of Russian influence operators most willing accomplices and useful idiots for decades.  The entire PC agenda is permeated with old Soviet-era messaging.

Yes, we have a Russian influence problem, but the real threat to America is the lack of American republican values & virtues, as espoused by our founding fathers in our founding documents, having enough influence in America.

We lack a common American bond.

The partisan, social (cultural) and economic (class), and ethnic divides are splintering our nation into small, rabid, enemy factions.

Creating hysteria over Russian influence in our election, while doing nothing as Russians literally harass America’s military with no fear, is about like the French with their idiotic burkini ban.  French police patrolling beaches to harass Muslim women who are wearing modest swimwear, yet not securing their border, shows the complete disconnect from understanding real threats vs. ridiculous political antics masquerading as sound policy.

We need to respond to real acts of aggression forcefully and without fear or hesitation!

We need to quit with the endless information warfare being waged between American partisans.

“United we stand, divided we fall” – that’s as simple as it gets.

America needs to become ONE TEAM!