“Wherever one found informality, unconventionality, a firm handshake, an open door, a breezy rhetoric, an unrestrained manner, there was the West.”

With our endless silly, shallow, venal political circus in America, I’ve wandered back to America’s pioneer days this summer.  Of course, I am still keeping an eye on politics, because being an unrepentant news-junkie, going cold turkey away from news just ain’t happening.  Since traveling isn’t possible with my husband still recuperating from VP shunt surgery in June, I’m hitting the trail back to the Old West with my reading.

A while back JK left a comment recommending a David McCullough book, Brave Companions: Portraits in History, so I went ahead and ordered the paperback edition.  Some of the portraits are of people whose names did not even ring a bell, like Alexander von Humboldt, the subject of Chapter One: Journey to the Top of the World and the men behind the Panama Railroad, linking the Atlantic to the Pacific in Chapter Six: Steam Road to El Dorado.  Some were familiar names of famous people, but whom McCullough introduced a whole other dimension to their biography, like Charles Lindbergh, his wife, Anne Morrow Lindbergh, and Beryl Markham of Kenya, the first woman to fly the Atlantic from east to west, in Chapter Nine: Long Distance Vision.  McCullough explains these 20th century aviation pioneers:

“But most remarkable is how many of them proved to be writers of exceptional grace and vision, authors of more than a score of books.  Lindbergh wrote seven, beginning with We, a hugely popular account of his early life and the Paris flight, which was rushed into print that same year.  Anne Morrow Lindbergh, her husband’s copilot and radio operator on later expeditions, was a diarist and poet, who hardly ever stopped writing.  Her first published book, North to the Orient, described the unprecedented survey flight the couple made in 1931 in a small seaplane from New york to China by the great circle route over Canada and Alaska, touching down in Siberia and Japan.”

This short David McCullough book served as my summer reading jumping off point, as I sat here wondering why I had never read any Conrad Richter novels.  Richter is the subject in Chapter Ten: Cross the Blue Mountain.  I love American pioneer novels, so I have no idea how I missed Conrad Richter.  My love of stories about American pioneers settling in a new land began during the 1970s when America’s bicentennial mania hit.  I read every novel in the John Jakes Bicentennial series about the Kent family.   Around that same time I read Owen Wister’s novel, The Virginian: A Horseman of the Plains, for the first time and fell in love with the main character, the strong, quiet cowboy, the Virginian. This remains my all-time favorite Western novel.

This McCullough book is how many of my reading adventures begin.  I debated buying Conrad Richter’s 3-novel series, The Awakening Land, but even the kindle versions are $11.99 each and I already have piles upon piles of books and many kindle books that I have not read yet, so a bit of book hoarding guilt set-in.

Near the end of McCullough’s portraits, in Chapter Sixteen: Recommended Itinerary, McCullough offers suggestions of places to visit in America, but he also writes, “Look at people when you travel. Talk to people. Listen to what they have to say.”  That’s advice worth heeding always.  He also advises:

“Or go to a tiny graveyard on the Nebraska prairie north of the little town of Red Cloud and look about until you find a small headstone. It reads “Anna Pavelka, 1869-1955.”

By every fashionable index used to measure success and importance, Anna Pavelka was nobody.  Three weeks ago my wife Rosalee and I were among several hundred visitors who arrived in a caravan of Red Cloud school buses to pay her homage.  Who was she and why did we bother?”

She was born Anna Sadilek in Mizzovic, Bohemia, present-day Czechoslovakia, in 1869, at age fourteen she sailed with her family to America to settle on the treeless Nebraska prairie in a sod hut.  Some time later, in despair over the struggle and isolation of his alien new life, her father killed himself.”

As soon as I read that I thought, “she’s My Antonia” and sure enough that’s exactly who Anna Sadilek was.  My Antonia is a pioneer novel written by Willa Cather.  In one of my early blog posts, Survival: The Mind-set, back in 2012, I mentioned  this Cather novel:

“This novel exemplifies the “put one’s hand to the plough” mentality that separates those who persevere and thrive and those who prefer to wallow in misery.  The young male main character, Jim Burden, narrates the story of moving to early 20th century Nebraska to live with his grandparents, who were early homesteaders.  Jim becomes fascinated with neighboring homesteaders, the Shimerdas,  a family of Bohemian immigrants.  Throughout the story, Jack’s grandmother exemplifies the indomitable American spirit and she’s a testament to planning not just to survive, but to live as comfortably as possible in an unforgiving environment.  The Shimerdas, city-dwellers in their home country, fail to take responsibility for their own survival, necessitating good neighbors to prevent their demise.  In one scene the grandmother packs a hamper to take to the Shimerdas, she offers this line:

‘Now, Jake,’ grandmother was saying, ‘if you can find that old rooster that got his comb froze, just give his neck a twist, and we’ll take him along. There’s no good reason why Mrs. Shimerda couldn’t have got hens from her neighbours last fall and had a hen-house going by now. I reckon she was confused and didn’t know where to begin. I’ve come strange to a new country myself, but I never forgot hens are a good thing to have, no matter what you don’t have.”

Despite the Shimerdas family’s hardships and suffering caused by their parents lack of survival skills, Antonia Shimerda and her siblings (thanks to neighbors and others in their rural Nebraska community), get on the path toward successfully homesteading and thriving in America.”

I picked up my tablet and read Cather’s O’Pioneers, which I already had in my kindle library.  Cather’s pioneer novels,  give life and voice to the unforgiving land, taking it from being just the setting of her stories, to being as alive and vibrant as her human characters.  Then I waffled and ordered the kindle version of Conrad Richter’s short-stories, Rawhide Knots & Other Stories, thinking that I could get a taste for his writing and decide if I want to order some of his novels.  My local library doesn’t have any of Richter’s novels, which made me wonder if he was one of those Pulitzer Prize winners whose work appealed to literary critics more than the general public.  By the fourth short story  I’m already a Richter fan. He captures the harshness of that land too and like Cather,  his female main characters aren’t delicate flowers.  These women, just like the men, are gritty survivors in a new land. 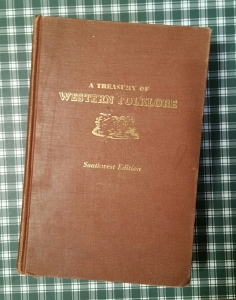 I pulled out my old copy of Lonesome Dove, a truly epic Western by Larry McMurtry, which I read decades ago and might reread that and I also pulled out this old hardback book, A Treasury of Western Folklore, that I picked up in an antique/junk store in Clovis, NM in 2006.  My husband and I had driven to Clovis to visit our son serving in the Air Force, before he deployed to Iraq.  I’ve started skimming through this collection and reading some fascinating bits of trivia and tall tales.  The story about how the Stetson became the most recognizable piece of western attire ranks as an amazing merchandising strategy of a hat-maker, who began sending samples out west to merchants and the orders poured East to John B. Stetson’s hat-making factory in Philadelphia.

Once I tire of the Westerns, it will be time to start hunting down the Lindbergh and Beryl Markham writings.  One slim David McCullough book looks like it will keep me exploring new vistas for quite some time.

… and of course I read close to a dozen historical romance novels this summer too… but even several of those were set in the Old West… Some things never change. Have a nice day!