While the American media and President Trump fall into another SPIN “shithole”, today’s blog post is not going to be about politics.  Some Democrats, after a meeting with Trump, decided to attempt another #Resist Trump takedown spin effort.  The mainstream liberal media went into full hysteria mode last night… again… about “Trump is a racist”.

I had been working on a junk journal last night and didn’t look at Twitter until close to midnight.  It took me about 30 seconds of scrolling through journalists’ tweets to assess a full-blown #Resist SPIN attack underway.  By this morning, a great deal of the liberal Twitter shitstorm over “shitholes” was so over-the-top, that it’s clear they may, once again, end up bolstering Trump rather than taking him down.

Many of the #Resisters, who pretend to be objective journalists, sound  like hysterical lunatics. 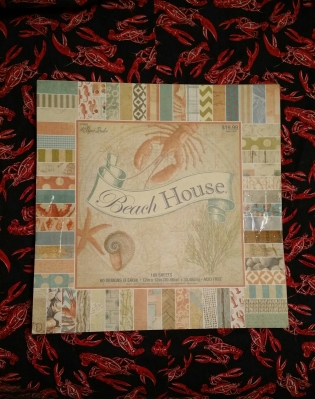 The altered book junk journal I am working on is for my youngest daughter.  I found this lovely scrapbook paper at Hobby Lobby a few weeks ago, when they had this brand of paper on sale for 50% off.  The background is actually a skirt my youngest daughter sewed in her early teens.  She loved this dark navy fabric with the lobster print, even though I was trying to steer her toward pretty pastel colored fabric.  We found an easy skirt pattern and she sewed several pretty floral print skirts and this lobster print skirt, needing very little assistance, once she did a little bit of practice sewing on scrap fabric to get the hang of machine sewing.  I came across this skirt in the spare bedroom closet recently and my mind flew to thinking it would be great to repurpose it as a junk journal cover and possibly use more of it to make a tote bag for her too.

The picture above is one of my favorite childhood books, that I came across looking through old books for junk journaling.  It’s pretty beat-up and has pen scribbles on it, that I know I didn’t put there.  I know this, because I wrote my name inside the front cover of my books and did not scribble or write in them.  When I got to college and first observed the habit of using highlighter markers in your textbooks, well, I was appalled that people would deface their books like that.  I never got into the habit of “highlighting” or writing in my books and I tried to take good care of my books.   And of course, bending down page corners to mark your place in a book should be punishable with a good smack upside the head.

Book collecting (hoarding) is a lifelong habit, that I will never quit, although I’ve tried to read more kindle books and buy less actual books in recent years.  Sadly, my same book hoarding habits easily transferred to digital hoarding too.  My bookmarks always are out of control, same with the other crap I download and my Pinterest has over 200 boards and over 12,000 pins…   I have pinned way more recipes and craft projects than I can ever use, but I still keep pinning more.

Anyone else have this  “hoarding” problem with digital information?

One of my happiest memories of my early years of school was receiving my Scholastic Book Club flyer from my teacher, pouring over every book listing, then compiling my “wish list”.  Usually my list contained almost every book in the flyer.  My mother would give me money for books and then I had to sit there and decide which books I wanted the most, to fit my small book allowance.  I bought Codes & Secret Writing when I was around 10 years old and it fueled my interest in cryptography. Learning about its use in warfare led to my interest in military strategy.  I also liked reading mystery genre stories, as a kid, which often involved strange happenings or odd people rather than the more common adult crime detective mysteries.

Truth be told, I was never very good at codes and ciphers and I found military strategy much more my cup of tea.

Another of my favorite childhood book genres was biographies of great or famous people.  I still like reading about important people in history, but I prefer a narrower selection now, opting to read biographies about people whose lives and/or ideas impacted history in some profound way.   I also moved toward trying to read the person’s own writings and letters whenever possible, rather than relying on a biographer or historian’s assessment.  This habit grew out of observing that too often historians seem to work from having already decided on the character of the historical figure they are writing about and using their research to cherry pick historical documentation to bolster their preconceived character assessment.

In comments on my last blog post, JK provided links to several very interesting John Batchelor interviews with historians, H.W. Brands, Ron Chernow and Robert L.O’Connell on two fascinating and controversial historical figures, Ulysses S. Grant and William Tecumseh Sherman.   It’s interesting that two of the most important generals in the Union winning the U.S. Civil War ended up with their characters frequently extremely maligned, yet Robert E. Lee, who led the Confederate forces, trying to tear the United States apart, has consistently been recast as a saintly man of conviction and the “better” general, even though he lost…

I honestly believe that at the core of the perceptions of Grant and Lee lies a class bias, where Lee obviously had the pedigree of a Southern aristocrat and Grant came from a hardscrabble working class background.  It’s much easier to place Lee, with his impeccable personal appearance and stately bearing, as a majestic war hero on a statue than it is Grant, with his rumpled clothes and lack of a commanding presence.

On a day when America’s politicos continue to furiously tweet on about Trump’s shithole comment, it’s important to remember that America’s greatness lies in our commitment to the belief in the power of freedom to transform the lives of individuals.   It’s not where you came from, the color of your skin, your religion, or sex; it’s about believing that in America you are free, to borrow Emerson’s line, “Hitch your wagon to a star.”

Here’s a 2016 Marco Rubio quote that I came across in an Ian Tuttle piece at National Review, which sums up America eloquently:

I wish Trump and his enemies waging these Tweetstorm battles would call a truce to this destructive information war, but each side believes they’re “saving” America, even though their SPIN battles deepen the partisan divides in America, incite rage, and fray the bonds of civil society.  You don’t need to understand any secret codes or ciphers to see how damaging SPIN is to America, all you need to do is listen to the Trump vs. the Media news a few minutes a day.

9 responses to “America is more than Trump & Media Tweetstorms”