My youngest daughter is 29 years old and lives near Dallas, TX.  She usually calls me in the morning as she’s driving into Dallas to work.  She often relates what’s happening with protesters outside the building where Senator John Cornyn’s office is located in Dallas, because she works near there.  One day in January she messaged  me some photos of these protesters and she asked me what we’re supposed to be “resisting”.  Then she asked me how people have time to show up day after day and protest.  She said it must be nice not to have to go to work.

Yesterday the Left staged another feminist protest, A Day Without Women general strike.   My daughter called me as she was driving to work and she mentioned this protest in scathing terms.  She said if she doesn’t work, she doesn’t get paid and she asked me what was the point of this protest.  I don’t think the feminist organizers can even agree on a message or what political goals they are seeking.  In a style change from pink pussy knit caps and lady parts costumes of the Women’s March, the organizers of this “general strike” encouraged women to wear red.

“Little Women,” she replied. “Because it was the first time I realised women could be a whole human world.”

Oh man, she’s right – so right I yelped when I read it. Because if I had one piece of advice for young girls, and women, it would be this: girls, don’t read any books by men. Don’t read them. Stay away from them. Or, at least, don’t read them until you’re older, and fully-formed, and battle-ready, and are able to counter someone being rude to you, in conversation, not with silent embarrassment, or internalised, mute fury, but a calm, “Fuck you very much, and goodbye.”

Because if there’s one thing that has made me, perhaps, happier in myself, and more confident about writing the truth, and less apt to run myself down for my appearance, weight, loudness and unusualness than many, many other women, it’s that I never read books by men when I was younger.
Read more at https://www.penguin.co.uk/articles/features/2017/mar/caitlin-moran-how-books-made-me-a-feminist/#2qw3YCE2VicM0wUf.99

Picking literature to read based on the sex of the author…  That’s what edgy feminism is about today???  At this link there’s an interview of Moran and photo of her.  It’s kind of interesting that a hardcore feminist likes a top with such traditional smocking and embroidery, but her top speaks loudly about the total trainwreck of modern feminist ideology.  These angry, self-righteous, bigoted, ignorant feminists don’t really have any clear ideology or political ends.  They’re just making up attention-seeking, headline-grasping nonsense as they go.  Too many modern feminists truly have no respect for traditional female roles or the women who find  happiness and contentment pursuing domestic endeavors.  Some women prefer to be at home with their children and taking care of their home.  Decades of feminist indoctrination hasn’t been able to alter that.  This lady may spout hardcore feminist dogma, but her top speaks loudly that she admires lovely embroidery. 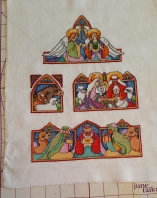 Over the years, I’ve completed many needlework projects, but many “to-be-completed” ones are stashed in plastic storage containers, so I’m working at completing some of them.  The nativity scenes in the counted cross stitch piece above, I stitched around 1995 or 1996.  I only had the backstitching to complete on the bottom section, but I got busy with other projects, then I lost the pattern for this.

A few weeks ago, while going through a large plastic container of craft stuff in the garage, lo’ and behold I found the wooden frame that is for the nativity scene cross stitch, so I brought it into my sewing room.  I dug out the cross stitch piece and kept looking at the camels, not sure where the backstitching around their eyes should be.  Then I remembered that I had a large manila envelope with Bucilla needlework catalogs on one of the bookcases in my sewing room.  So, I began looking through them and in the 1995 Bucilla Holiday catalog there is a picture of this nativity scene picture.  With my magnifying lamp I use for needlework, I could easily see the backstitching in the photo.

So, here’s a completed piece that sat in a box for over 20 years.   When I started to relay this story about the old catalog to my daughter, she interrupted me and said, “Why do I get the feeling this is going to be one of your hoarding stories?”   Hoarding stories are her euphemism for stories where I point out some happy outcome from using junk that I should have tossed out decades ago.  My kids hate my happy hoarding stories…  They fear being stuck with all my junk to deal with when I die;-)

The photo of the stack of plastic canvas needlepoint tissue box covers are 8 of the 12 that I’ve made in the past few months.  I need to mail these to family and friends soon.

In honor of A Day Without Women strike, I watched a lot of embroidery videos yesterday and spent several hours working on a counted cross stitch project. Lately, reading or watching the news makes me feel a sense of dread and deep concern for America’s future, so I’m spending more time watching needlework videos and doing my own needlework.

The video below is a talented needleworker, Shagufta Fyms, who is a wonderful instructor. This video has 3,791,110 views on YouTube.  Not too shabby for an embroidery video.  She speaks Urdu, which I don’t know at all, yet amazingly I can follow her instructions without a problem.  She obviously learned her stitch names and sewing terms in English, so it’s easy to know what type of floss or yarn she’s using, how many plies or threads and the stitches.  With the amazing carnations she stitches in this video, the ruffled effect of the carnations looks so exotic, but once I saw what she did, it’s the common buttonhole stitch, stitching with a doubled yarn, rather than a single strand.

Needlework videos in Chinese, Japanese, Russian, Korean, and the list goes on, are so amazingly easy to follow and the most common stitches in English embroidery are the same around the world.  Needlework is a universal language, I’ve realized.  There are even needlework videos with no speaking, set to music, and I can follow along and learn with no problem.  The comments on many of these needlework videos come from all over the world, in many different languages, where ladies post comments or questions.  Often a commenter helps explain something to another commenter.

Just an FYI, if you want to learn the basics of embroidery in English,  Sarah Homfray, a graduate of the Royal School of Needlework in Great Britain, has dozens of excellent videos on YouTube, from basics to advanced techniques.

I bet you could gather needleworkers from all over the world, stick them together in a large room with their sewing supplies, some tables and chairs, and within minutes they would be sharing their work and talking about their families. Needlework has been an integral part of family life around the world, from the time people began stitching together clothes.  It has also been an integral part of community life in many parts of the world. However, women around the world took the ubiquitous utilitarian and turned sewing into a decorative and artistic form of expression.

In American politics, the complete opposite is true.  We may all speak English, we may all be familiar with the same pop culture, restaurant chains, and stores, but when it comes to politics and the reporting of politics, partisans might as well be from different galaxies, because they don’t understand anything about each other, their belief systems have no common threads, even with news events, their understanding of the facts reside in different realities.

In many blog posts, I’ve written about finding common ground and of all places to find an important story about this very topic, here’s a Washington Post piece, from today,  about a female documentary filmmaker, Julie Winokur:

“It was the middle of the Obama administration, and Julie Winokur, a self-described liberal, was so frustrated with what she saw as Republican obstructionism that she would immediately dismiss any argument from the right. Then one day, her own child flipped her narrative. He told her she was “the most politically intolerant person” he knew.

“If the other side had a good idea, you wouldn’t know because you’re not listening,” she said he told her. “I realized in that moment that I was as responsible as the people I was pointing fingers at. You have to take ownership of your own contribution to the negativity.”

That was 2012, at the height of the tea party movement and in the midst of that year’s presidential election, when it felt like the partisanship and rancor couldn’t get worse. Her son’s criticism inspired her to stop lamenting it and instead try to fix it.

So Winokur, a documentary filmmaker in New Jersey, set out on a cross-country journey to meet people of different ideologies to discuss divisive issues. Carting a square folding table and a navy tablecloth with patriotic stars, she endeavored to take her son’s advice and really listen to other’s viewpoints. She wanted to get beyond talking points and regurgitated soundbites to discover why people who see things so differently from her believe what they do.”

Americans need to start trying to listen to other people’s political viewpoints and more than that, we need to stop assuming the worst about people who hold different political views.

The Federalist has a disheartening story on judging people, without talking to them or getting to know them:

In the latest episode of “Full Frontal with Samantha Bee,” the host accused a young man of having a “Nazi” haircut, even though, in reality, Kyle Coddington is a #NeverTrumper with brain cancer.

The show sent cast member Mike Rubens to attend the Conservative Political Action Conference in February and spliced together a video showing all the absurdities he encountered at the annual  event. A minute into the clip, a narrator says they saw lots of “Nazi” haircuts and showed a montage of young men who had their hair clipped short or shaved on the sides. Among those was Coddington, who appears sitting at his laptop at the 1-minute mark.

Samantha Bee’s Show Said He Had ‘Nazi Hair.’ He Actually Has Brain Cancer

One response to “Speaking the same language…”