With writing about politics – well, I wanted to be “fair” to Trump, with him being elected and deserving a chance to demonstrate that he can not only “act” presidential, but become a President, in thought and deed.  The American people voted and I respect that, but I haven’t changed my opinion, that Trump is a pathological liar, con man and total fraud.

The mainstream (liberal) media, assuredly, avidly searches for negative Trump stories to run with, but here again, Trump hands them ammunition constantly.  For instance, Trump has been reported to have only sat down for two intelligence briefings since becoming president-elect.  The Trump camp explained that away as Mike Pence is getting those intelligence briefings almost daily.

Then comes the Jill Stein/Hillary Clinton recount effort and Trump runs off into the weeds on a Twitter storm over the weekend about how he would have won, not only the electoral college, but also the popular vote, if over a million illegal immigrants hadn’t voted in the election.  There is absolutely no proof that over a million illegal immigrants voted, so where did Trump come up with this???  He retweeted it from someone on Twitter…  So, he has no interest in real intelligence briefings, but he wallows in tweet droppings…

This morning, the news is reporting Trump is interviewing retired General David Petraeus, who has made noises that he’d be interested in being Secretary of State.  Trump mouthpieces have been waging a complete character assassination effort against Mitt Romney, who would make an excellent Secretary of State, but are championing Petraeus, whose grossly negligent mishandling of highly classified information and obstruction of justice should have landed him in jail.   I remain confused by  the Trump mouthpieces’ antics

Petraeus, just like retired General Mike Flynn, was a Democrat, NOT a Republican.  Then again, Trump was a Democrat too, until his “GOP Insurgency”.  I found a tweet and retweet by John Schindler this morning, that I agree with completely:

Petraeus belongs in jail, not the cabinet. Team Trump is deep into magical thinking if they’re considering him.

John Schindler@20committee
If Trump makes Petraeus SECSTATE (or anything), he needs to send Hillary a formal apology for his #EmailGate rants. http://www.reuters.com/article/us-usa-trump-petraeus-idUSKBN13N1IO …

Since I don’t want to write all diatribes about the media and their hysterics about “fake news” or about Hillary and her endless staged “out and about” unplanned social media photo efforts or farcical “recount” or about Trump’s bizarro social media forays and crazytown cabinet selection process, I’m just working on sewing and craft projects.  Oh, and of course, pinning more “inspirations” on Pinterest too.  I’ve also been working on trying to organize my large collection of needlework patterns. 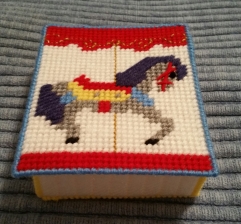 The box above, the pattern instructed to attach the lid to the box at the top and the lid lifts up, which I don’t really like.

Stitched this top yesterday (about 6″X 6″) and need to make the box now.  Making this one a lift off lid, so I’ll have to stitch pieces to attach to this top.

Here are the two other boxes;

And I made a boutique size tissue box cover (pictured below), which my son assures me is something only old ladies like – well, I am an old lady…  And I have dozens of patterns for plastic canvas needlepoint tissue box covers…  I actually stitched 2 and a half sides waiting at the doctor’s office when I had that sinus infection.  One of my small talents is I am a quick stitcher (from decades of sewing a lot).

Just need to buy a box of boutique size tissues for this one:-)  I have floral blue and yellow curtains and a comforter on the bed in the spare bedroom, so this blue and yellow tissue box cover will fit right in there.  I love that French country blue and yellow color combination:-)

So, after I finish the horse trinket box (my granddaughters like these little boxes for junk, btw), I am going to stitch these two quick long-stitch patterns for a 2 year-old boy:

Then, it’s back to working on some counted cross-stitch and quilting (English paper-piecing to be precise) and getting some Grandmother’s Flower Garden blocks sewn.  My great-grandmother loved to sew this hexagon-pieced quilt pattern and I was her handy color-coordinator/quilt piece cutter as a kid.  She had a large closet filled with boxes of fabric scraps, which I rummaged through sorting out prints into stacks of different colors for the various quilt blocks.  And then she had a cardboard template, which I used to trace the pattern on the back of the fabric with a pencil and cut out stacks of hexagons for her.  Luckily, I find tedious, repetitive sorting and cutting tasks relaxing, lol.  My sisters did not enjoy tedious sorting and cutting.  True story here, at Wal-mart when it came time to make sure that all the DMC embroidery floss skeins were sorted and counted for inventory, I enjoyed sitting there carefully sorting and counting each color…

My needlework is a welcome respite from the 2016 Election hell, that doesn’t seem to ever end…