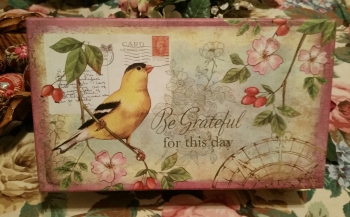 A dollar of cheer – yep, a decorative box from the Dollar Store to hold junk on my desk.

There’s still more of Buddy’s 4th of July sermon I want to incorporate into another blog post, but first I need to do some more research, reading and pondering.  I spend a lot of time “pondering”.   While I ponder that, here are some thoughts from this election.  This post is a mixed potpourri of thoughts – no cohesive theme.

The media, popular blogs and news sites are even more tiresome than the candidates, for instance, Drudge is running the same agitprop game for Trump against Hillary, that he ran against the GOP candidates in the primary.  It’s amazing to behold.  In a change from Drudge’s onslaught of posting photos of Hillary looking demented or decrepit, today he had a collage of Hillary the guzzler/alcoholic-themed photos.

The mainstream media keeps running non-stop “news” stories about “Trump the Sexual Predator” and then you have conservative news sites hyping “Bill Clinton the Sexual Predator”.  The Free Washington Beacon has a story interviewing Dolly Kyle, a woman who claims to have had an affair with Bill Clinton many years ago.  The irrelevancy and sheer cattiness of Kyle’s attack is stunning and one wonders what the point is to print this sort of garbage:

“Kyle’s most memorable run in with Bill and Hillary Clinton revolved around Hillary’s poor hygiene.

“I picked Billy up at the airport and he had this dowdy-looking middle-aged woman with him … this woman was Hillary,” Kyle said. “Hillary, I thought was a Hillary impersonator. Because she looked so bad and she smelled so bad I just didn’t believe this was Hillary.”

Hillary’s bad odor and unkempt appearance were what Kyle claimed she remembered most, thinking Bill Clinton was playing some sort of “sick joke” on her.

“I couldn’t imagine why Billy would haul such a person in the plane with him in public. She was wearing a misshapen, brown, dress-like thing that must have been intended to hide her lumpy body. The garment was long, but stopped too soon to hide her fat ankles and her thick calves covered with black hair,” Kyle said.

“I noticed that the woman emitted an overpowering odor of perspiration and greasy hair. I hoped that I wouldn’t gag when she got in my car. The sandal-shod woman with lank, smelly hair stood off to the side and glared at everyone.””

This extremely, full-bitch mode, catty attack is from the 1970s, just as Trump’s bimbo eruption is bimbos from years ago.  This Kyle woman was having an affair with a married man,  and that decades later she’s tossing this dirt out into the public square, speaks volumes about her character.  That news sites run this, as if it’s newsworthy, speaks to their lack of integrity too.  On the other side, days ago, Gloria Allred was wheeling out another woman who claims that Donald Trump treated her disrespectfully and like a sex object… that woman is a porn star…  Here we are, subjected to the geriatric Viagra generation’s sex stories.   Along with trying to go the low road of all-out scorched earth, for the media and online sites, all of this garbage is meant to garner clicks and attention.
Sex sells.

The scorched earth campaigns being waged by both Hillary Clinton and Donald Trump truly  disrespect the American people and are a national embarrassment.

I am reading some of the Pamphlet Debate from 1764-1775, which I have in a 2-volume set, because so many of the stirrings among the American people today and their discontent with Washington echo popular sentiment that brewed for the years leading up to the American Revolution.

I see some historical parallels in the rise of individual bloggers online, often writing anonymously, as being very similar to the pamphlet writers leading up to the American Revolution. This pamphlet debate preceded the Debate on The Constitution, which took place years later where the people, both for and against The Constitution, once again waged a war for the hearts and minds of the American people via pamphlets and newspapers.

These early American writers also often used pseudonyms.  So, political blogging using pseudonyms follows a long American tradition.  I actually went with my pen name as a combination of my affection for The Federalist Papers and my affection for historical romance novels.  There’s a Julia Quinn series, set in Regency England, where an anonymous writer, Lady Whistledown,  is publishing “titillating and intriguing society gossip”, which plays into the plots.  None of Lady Whistledown’s gossip comes anywhere near to this gutter politics election.

Gordon S. Wood, Brown University’s professor of history, emeritus, edited this 2-volume set and he states that the revolution was created in the minds of American rebels long before 1775.  The discontent rippling in both the outer edges of the left and right, which led to Sanders and Trump being able to gain traction, has been brewing for years too.

Military adventures, from ancient times to the present, while offering new territory and riches or securing some vital geopolitical advantage, are always expensive and almost always lead to a country incurring large war debts. In 1765, the British enacted The Stamp Act, which was very unpopular in the American colonies, but was intended to pay off war debt from The Seven Years War and fund security needs in the British North American colonies.

In the present, we have gone through more than a decade of endless war, with no real gain for America in any way – certainly no gain in national security. We have endured 8 years of increasing government programs with the exorbitantly expensive Affordable Healthcare Act, but that was preceded by an economic downturn, trillions in debt through the bail-outs and prior to that GWB doing his prescription drug program, in the midst of very expensive military operations in Iraq and Afghanistan.

The looming debt crisis coupled with a stagnant economy and the fractured polity in Washington is fomenting widespread discontent, but even worse, distrust in our government’s ability to govern.

For the past year, the common refrain to justify the anger that feeds the Trump movement, BLM, Sanders supporters, and other Americans feeling mistreated disgusts me.   Each person railing should be asked what they have actually done to make their own life, their families’ lives and their community a better place.  People throughout the ages always look to some mystical leader to create, to borrow President Obama’s, parting the waters promise, “Change you can believe in.”

No one person or leader can “make America great again” or  turn an angry person, who feels his/her life  a train wreck into a success.  Only you can change your own life and establish order in it and only people in their own communities can establish the social structure and actions to restore broken communities.

Russelk Kirk explains social order in terms everyone can understand:

“Like many other concepts, perhaps the word “order” is best apprehended by looking at its opposite, “disorder.” A disordered existence is a confused and miserable existence. If a society falls into general disorder, many of its members will cease to exist at all. And if the members of a society are disordered in spirit, the outward order of the commonwealth cannot endure.

We couple the words “law and order”; and indeed they are related, yet they are not identical. Laws arise out of a social order; they are the general rules which make possible the tolerable functioning of an order. Nevertheless an order is bigger than its laws, and many aspects of any social order are determined by beliefs and customs, rather than being governed by positive laws.

This word “order” means a systematic and harmonious arrangement—whether in one’s own character or in the commonwealth. Also “order” signifies the performance of certain duties and the enjoyment of certain rights in a community: thus we use the phrase “the civil social order.””

Washington can’t fix what’s broken in America, only millions of Americans across America, committing to change their own lives, families, and communities can do that.  However, some honorable leaders assuredly could help inspire and guide Americans in this process.  Money and more “programs” can’t fix social problems – only people can do that.

It’s highly unlikely, that either Trump or Hillary will be able to move the country toward any sense of unity or common purpose – both are clueless, corrupt, lack any historical vision, and beyond that both have narcissistic personalities, that repel people from being able to trust in their integrity. Either one bodes poorly for America’s future. Hillary will be consumed by fall-out from her emails (especially foreign blackmail) and Republicans determined to expose her corruption. Trump will be easily manipulated by America’s adversaries, continues to prefer waging war against Republicans, meaning he will never be able to unify even his own party, let alone Democrats or the country. His hubris, coupled with his disdain for actually studying policy and penchant for rash, incendiary statements, dooms him as a leader.

Two toxic leaders, who are both neck deep into wholesale public corruption,  are the choices.  American discontent and virulent factions  assuredly will continue to percolate, but I hope they don’t boil over.  Trying to keep a positive attitude is a challenge where the media and these two vile candidates have turned watching the news so cringe-worthy, you feel like you need a shower afterwards.

I kind of like looking at my Dollar Store box, with the metallic gold lettering and cheerful yellow bird.  I keep it here on my desk to cheer me up every day… and remind me to: “Be grateful for every day!”

America needs voices of hope and inspiration… but absent that we can always laugh:

There’s a whole bunch of these “epic rap battle” videos on YouTube, like Joan of Arc vs. Miley Cyrus or Dr. Seuss vs. Shakespeare, etc., etc.