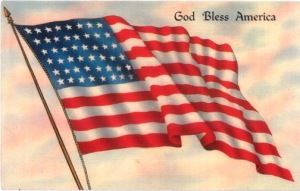 Today is almost over, but I wanted to mention that today was Flag Day and I came across this passage from the Roger Kimball book, “The Fortunes of Permanence: Culture  and Anarchy in an Age of Amnesia”,  that eloquently expresses the hope for America:

Here individuals of all nations are melted into a new race of men, whose labours and posterity will one day cause great changes in the world. —J. H. St. John de Crèvecœur, Letters from an American Farmer, 1782

The one absolutely certain way of bringing this nation to ruin … would be to permit it to become a tangle of squabbling nationalities. —Theodore Roosevelt, Autobiography, 1913

A FEW YEARS AGO, on a trip to Maryland, I stopped at Baltimore Harbor with my wife and five-year-old son to see Fort McHenry, the site, in September 1814, of the Battle of Baltimore, a decisive episode in the War of 1812. It was a glorious spring day: the sky was an infinite azure punctuated by a flotilla of stately white clouds. Our first stop was a modern outbuilding adjacent to the eighteenth-century fort. We crowded into a small theater with about thirty fourth-graders and their teachers to watch a short film. Among other things, we learned about the origins of the war, about how the British took and burned Washington, about how at last a thousand U.S. troops under George Armistead at Fort McHenry successfully defended their bastion against the British naval onslaught, saving Baltimore and turning the tide of the war.

It was (as the Duke of Wellington said of Waterloo) “a damn nice thing— the nearest run thing you ever saw.” The British ships, anchored out of range of Armistead’s cannons, pounded the fort with mortar and Congreve rocket fire over the course of twenty-five hours. Sitting on a truce ship behind the British fleet was a young American lawyer and amateur poet named Francis Scott Key. He watched as the battle raged, dappling the night sky with noisy coruscations.

Sometime before sunrise, the bombardment suddenly stopped. Key was uncertain of the battle’s outcome until dawn broke and he saw the American flag fluttering boldly above Fort McHenry. (When he had taken command, Armistead asked for an extra large flag so that “the British would have no trouble seeing it from a distance.”) There would be no surrender. The Brits abandoned their plans to invade Baltimore. The war would soon be over. As soon as he caught sight of Old Glory, Francis Scott Key began scribbling what would become “The Star-Spangled Banner” on the back of a letter. He finished it in a hotel in Baltimore a day or two later. The poem was an instant hit and was soon set to “The Anacreontic Song,” an eighteenth-century English drinking tune. It became the official national anthem in 1931.

The film ended and strains of the song began floating out from the loudspeakers— softly at first, then louder and louder. Everyone in the room scrambled to his feet.

O say, does that star-spangled banner yet wave
O’er the land of the free and the home of the brave?

The schoolchildren stood reverently, each with his right hand over his heart. A floor-length curtain wheeled back, flooding the room with light. There was Fort McHenry. And there, rising above it, was the American flag, waving gently in the breeze. With the possible exception of our son, who was busy attacking The Enemy with his toy F14, there wasn’t a dry eye in the house.

Of course, that calculated piece of theater was in part an exercise in sentimentality. Is that a bad thing? Wallace Stevens may have been right that, in general, “sentimentality is a failure of feeling”— a sign of counterfeit emotion rather than the real thing. Nevertheless, there is a place for a bit of affirmative sentimentality in the moral economy of our society. Among other things, it provides emotional glue for our shared identity as Americans. These days, perhaps more than ever before, that identity needs glue. As we contemplate the prospects for America and its institutions in the twenty-first century, it is not only particular cultural and social institutions that deserve scrutiny. What we might call the institution of American identity— of who we are as a people— also requires our attention.