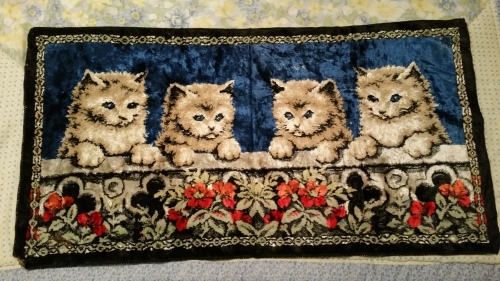 My kitten rug my Pop bought for me in a local PA diner.

In several posts I’ve talked about my father, whom we called “Pop”.  He had a 10th grade education and started out in road construction, operating heavy equipment.  In time, he worked his way up to supervisory positions in a construction company.  Often on weekends he would take a couple of us kids along to see his latest road construction projects.  I always loved those little trips, because first we’d have breakfast at a local diner (a PA iconic fixture).  My Pop knew everyone, so I loved listening to all the conversations.  One time some salesman came into the diner and had a bunch of rugs with various pictures on them (sorry no Elvis ones back then) and my eyes lit up when they struck upon this small rug with a row of cute kittens on it.  I didn’t even utter a word, but Pop told the salesmen he wanted the one with the kittens on it.  I still have that rug.  He often came home with small gifts for my sisters and brothers and he always played it off like it was no big deal and he just happened to come across this.  He loved to fish and he bought fishing poles and little tackle boxes, worm bait boxes, minnow buckets, etc. for us.  He even patiently tried to teach me to cast my line, but being a leftie, mishaps often followed my aimless casts.  My hook only occasionally landed in the water.  One time it ended up in Pam’s curly hair and her Dad and Pop spent several minutes trying to extract that hook without pulling out a chunk of her scalp.  Pop didn’t yell or lecture me, no, he moved me several yards upstream and told me it was safer to give me more room to practice.

Sometimes amazing things happen and as for me, well, this story made me a believer in miracles.  It’s a short story about how Pop brought my dead pet rabbit back to life.  We had lots of pets.  Let me rephrase that, my brothers and sisters had some pets, but I had lots of pets.  Today, the pop psychology terminology to describe my behavior would be “pet hoarding”, but back then I thought I just loved animals.  I carted home numerous strays and unwanted pets.  Luck followed me, as some of my pet acquisitions could have been problematic, like the time a boy brought three mice to school for a science project in a small aquarium and then said he didn’t want them.  I felt like fortune had smiled on me that day.  My Mom’s immediate concern was the odds of those three multiplying,  but it turned out that they were all male mice.

We had lots of rabbits over the years and many of them were very tame.  We would have them out in the yard hopping around. One summer my favorite rabbit suddenly became ill and he couldn’t hold his head up.  My Mom thought he had a neurological problem and  he had been out in the front yard frequently, so she wondered if the recent insecticide spraying might be the cause.   Pop took my rabbit along with him to work one day and Mom told me that he had to get rid of my rabbit, because he was suffering so much.  I cried for days, but gradually I accepted the loss.

Almost a year later Pop came home from work one day and he had a surprise for me – my rabbit, alive and healthy.  Pop said that the day he took my rabbit along to work to dispose of, he stopped at the diner for breakfast and the man sitting next to him started talking.  This man had some sort of job with the PA wildlife commission.  Pop said when he explained the situation with my rabbit and how he couldn’t hold his head up, this man said he would take my rabbit to the state lab where they were doing research.  This man contacted my father and returned my rabbit, fully restored to health.  I’ve often heard people talk about the fancy things their fathers bought for them – like a new car, but so far none of those things tops Pop bringing my rabbit back to life.

Filed under Food for Thought

One response to “My Lucky Rabbit”